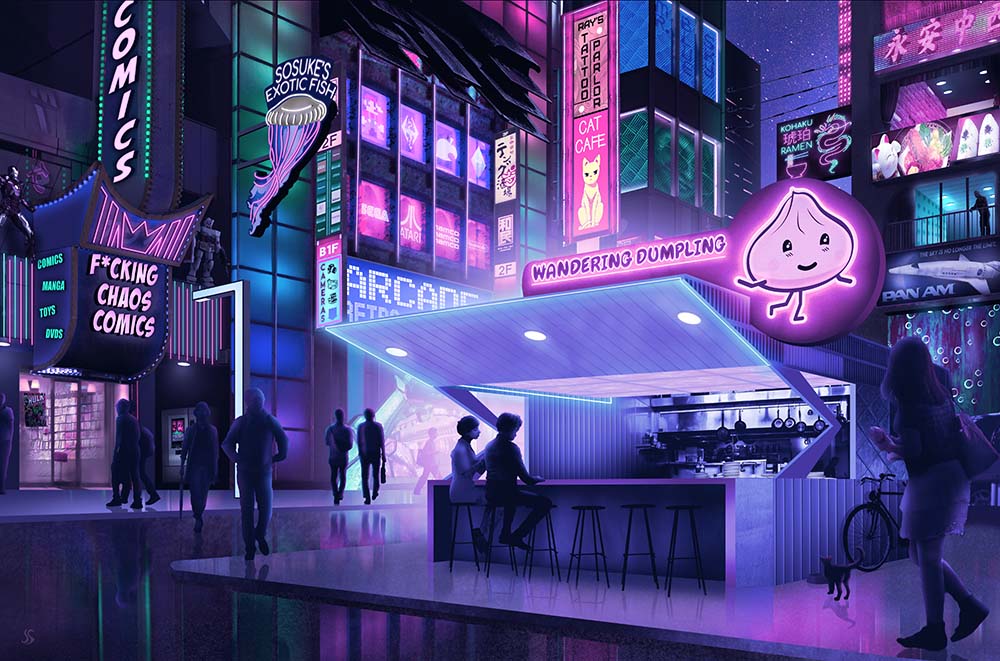 Original digital art by Jason Snyder. For the past several months, I’ve been trying to learn the art of ‘Photobashing’. For those unfamiliar, this is the technique that many designers in the video game and film industries use to whip up concepts quickly, without spending huge amounts of time creating every miniscule detail from scratch. Stock photos are chopped up and formed into new and unique shapes and compositions. This is my first serious attempt to create a sci-fi, pop culture infused, retro futuristic city scene. This illustration used elements from 43 different stock photos, plus a lot of my own unique designs. Many of the neon signs are my own designs. It took a long time to create, which kind of goes counter to the goals of photobashing, but I’m a newb, and I was sort of enjoying figuring out what easter eggs from my ID to include. I kind of like it.

Jason’s Rating: 9.3 / 10 (About my rating system.)
“The fool! The meddling idiot! As though his ape’s brain could contain the secrets of the Krell!”

When comparing and contrasting 1950s science fiction films, there are several qualities that are tantamount. Which film had the best flying saucer? Which had the scariest monster and the coolest robot? Which ethereal soundtrack is the most identifiable? Given these criteria, it’s hard to imagine a 50s sci-fi film better than “Forbidden Planet”. From the moment you see the C-57D cross your screen, you know that this is not your typical B-movie flying saucer dangling from a string.

“Forbidden Planet” is visually striking… in fact, it’s nothing short of astounding, given the constraints of the time. Of course they were backed by MGM dollars and an intention to make a real movie, not just Saturday matinee fare, but still, the scope of the visuals here is breathtaking. Watch the scene in the belly of the Krell machines. Or the C57’s crew fighting the invisible yet illuminated ID monster. The melting of the white hot laboratory door. These scenes could hardly be done any better today even with the use of CGI. Beyond the quality of the effects, this film is the absolute epitome of mid-century Populux futurism. Gorgeous cantilevered structures, boomerang furniture and radiating disks. And Robbie the Robot… what can I say about Robbie? He is simply the coolest robot that has ever been conjured on film or paper.

The story is based on Shakespeare’s “The Tempest”, though how closely it parallels, I really can’t say. The character of Morbius, played by Walter Pidgeon, is certainly Shakespearean, given the highs and lows of his accomplishments and tragedy. A young, and not very comedic Leslie Nielsen, plays Commander J. J. Adams, captain of the C-57D. He and his crew have been dispatched to check on a deep space colony on Altair IV which hasn’t been heard from in years. Adams and his shipmates (including Doc Ostrow, played by veteran character actor Warren Stevens) discover that the only remaining members of the colony are Dr. Morbius and his daughter Altaira, played by heavenly sprite, Anne Francis. Without getting too deep into the plot, things get complicated when a crewman is murdered and secrets of the planet’s ancient but extinct civilization come to light.

The acting isn’t particularly strong, with the exception of Walter Pidgeon, who always captivates me. The story more than compensates, and has me riveted every time I watch. The last forty minutes of the film are particularly suspenseful.

The soundtrack deserves an honorable mention as well. Completely electronic, yet utilizing no theremin, oscillator circuits and a ring modulator were used to create the electronic tonalities. (On a side note, I had a professor at the University of Miami, who piped in this soundtrack over the editing shack speakers. I’m pretty sure I was the only student who appreciated his sense of humor.)

This is one of my favorite films, and if you appreciate the sci-fi genre, it’s required viewing. 9.3 stars, based on Jason’s Movie Rating System.