There are not nearly enough science fiction comedies. Really, we see them pop up once every other year, and they are hit and miss. Another great sci-fi comedy that comes to mind is “Galaxy Quest” which really is right in the same family as “Paul”. If this type of movie has a sub-genre, I’d call it the ‘self aware sci-fi comedy’. By that, I mean the story takes place in our reality with the primary characters knowing science fiction to be just that… fiction. But then, that perception is turned on its head and sci-fi becomes reality. The comedy, at least in part, comes from this dynamic.

“Paul” starts as UK uber-geeks Graeme and Clive (Simon Pegg and Nick Frost) are visiting the United States to experience Comic-Con and then voyage across the UFO badlands of New Mexico and Nevada in a rented motor-home. Their sci-fi fantasy trip soon turns into sci-reality when they meet Paul (voiced by Seth Rogen) a grey alien on the lamb from the US Government. As they evade man in black, agent Zoil (Jason Bateman,) they encounter an evangelical woman named Ruth (Kristen Wiig) who joins their quest.

The cast is spot-on. I’ve been a fan of Pegg and Frost since seeing “Hot Fuzz” (then retroactively, “Shaun of the Dead” and “Spaced”). I especially like the fact that their rolls are sort of reversed from what we’ve seen in other films. This time around, Pegg plays the more impetuous role, while Frost plays it rather controlled and introverted. Bateman’s deadpan performance as Zoil (with an odd but funny payoff to his name, late in the film) is also enjoyable and a nice change of tone from his usual characters. And of course, Seth Rogen as the title character, Paul, is, well, he’s Seth Rogen. But I really like Seth Rogen, and frankly that’s what I expected.

This is truly a geek film, making a wide variety of sci-fi and comic book references, some of which will be apparent to the masses, but with many more geared toward a nerdier demographic. That said, it’s totally approachable to mainstream audiences. I love this movie and it will be a frequent rewatch for me. 8.35 stars, based on Jason’s Movie Rating System. 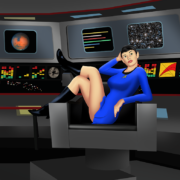 Pinup – Am I In Your Chair, Captain?