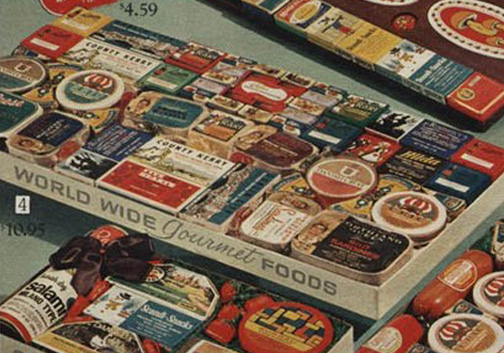 Oh, and click the photos for a larger view, in most cases the full catalog page. 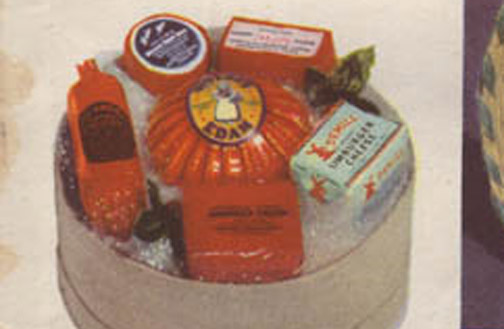 Sears 1947 catalog. Post war US… not much in the way of frills. Just a hatbox with some big clunky cheese blobs. But it’s a start. 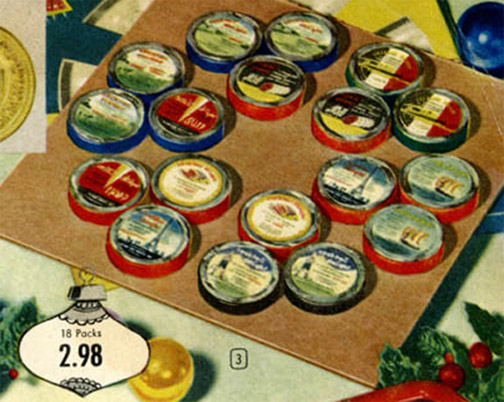 Spiegel 1955 catalog. Still a little plain Jane, but notice the standardization of shape and size. The evolved gift cheese is beginning to take its first steps out the culinary ooze.

Sears 1958 catalog. Ah ha! The first cheese puzzle box! Multiple shapes, wedges, discs and cubes, ingeniously arranged to optimize space while at the same time creating an appealing composition. Ok… wait a tick. What is that on the right? Spooky food? Sears and Roebuck beat the Bertie Bots and Fear Factor crazes by 40 years, offering its catalog customers canned caterpillars, grasshoppers and tuna hearts. During Christmas. Let that sink in. 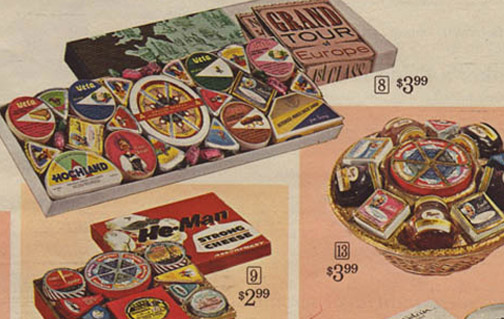 Sears 1964 catalog. He-Man Strong Cheese. Like most “He-Men” I have encountered in my time, “Strong” equates to “Smelly”. 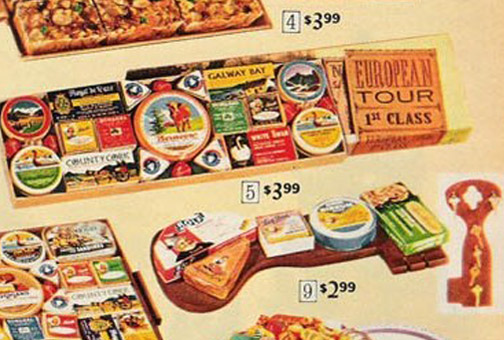 Sears 1966 catalog. Selling boxed cheese and sausage is a lot like selling fireworks. You highlight the individual items with the most vivid primary colors imaginable, package them up together in a cellophane wrapped flat, and watch them fly off the shelves. 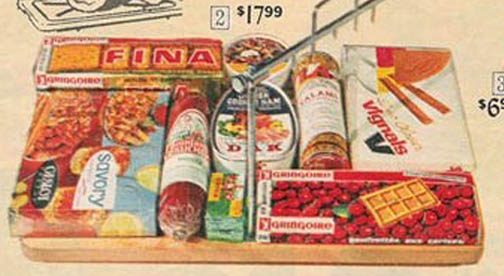 More from the Sears 1966 catalog. Looks like a modern gift box from Ikea’s food shop. 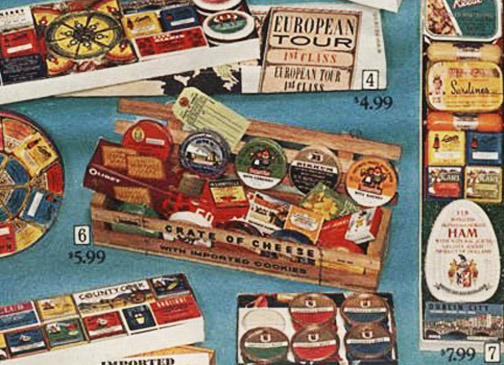 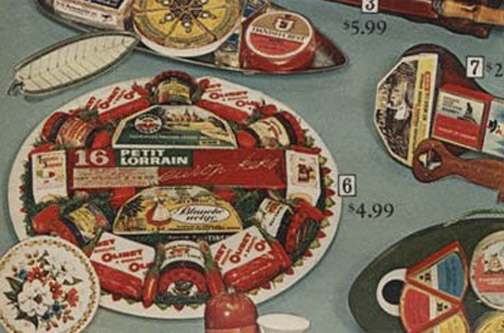 More from the Sears 1971 catalog. ’71 seems to have been the high point for Sears’ sausage and cheese offerings. They had four full pages of the stuff. After that, it tapers off until the early ’80s when they just decide not to sell it at all. 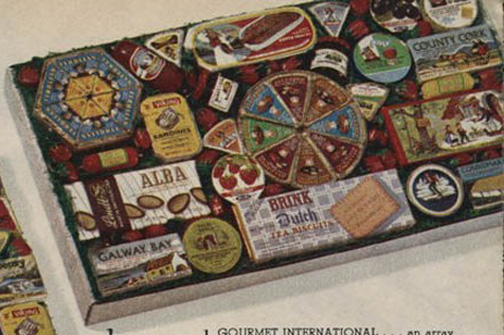 Spiegel 1971 catalog. Oh look, it’s the first flat pack to include those strawberry hard candies as spacers. Today, it’s almost impossible to find a pack without them. Strawberry candy seems an odd choice. Is strawberry supposed to be a natural cleansing agent when sampling multiple types of cheese? Like wine crackers? 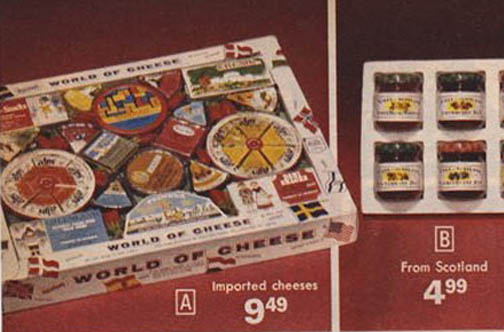 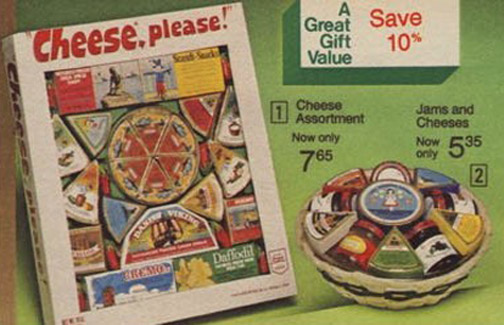 J.C Penney 1976 catalog. Cheese Please! I like the sentiment, but I demand sausage with my processed, foil wrapped cheese. 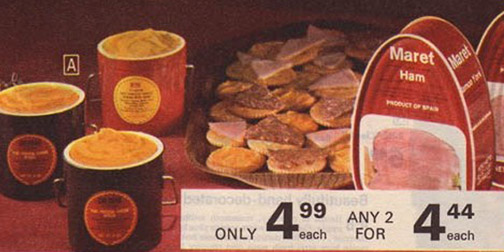 Montgomery Ward 1978 catalog. Ah, the introduction of the cheese crock in late 20th century America. Not a new invention by any means, earthenware crockery is an olde world method for keeping dairy fresh. But it seems like cheese crocks made a major resurgence in the late 70s, since every garage sale I go to has at least four crocks selling for 50 cents. Without the original cheese, of course. 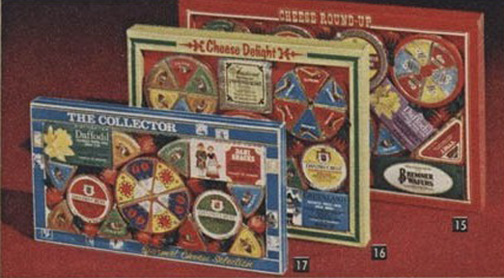 Sears 1979 catalog. The first box is labeled, “The Collector”. Can one really collect cheese? It doesn’t seem wise. Unless of course you have an accessible underground system of caverns beneath your house, with a consistent cool and dry atmosphere. 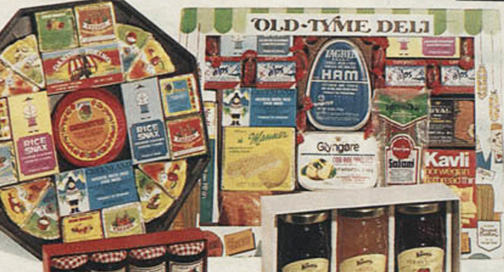 Montgomery Ward 1981 catalog. There is no doubt that this is truly old fashioned cheese and meat. Spelling Old-Time with a “Y” instead of an “I”, makes it so. 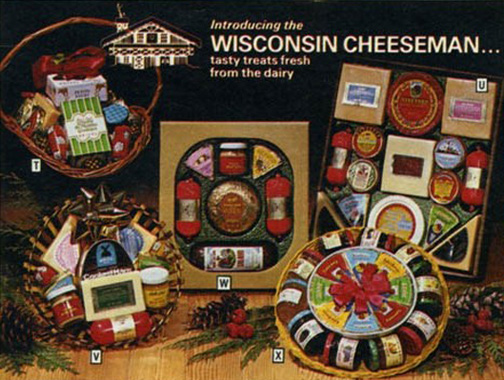 Sears 1983 catalog. ’83 was the last year I could find where Sears was selling sausage and cheese. After this, it was all fruitcakes, ribbon candy and tubbed popcorn. 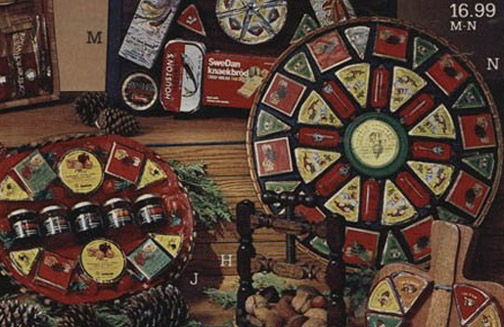 Too bad, our journey ends here. The full catalog snags are credited to Wishbookweb.com. If you want a nostalgic trip, visit their site pronto.