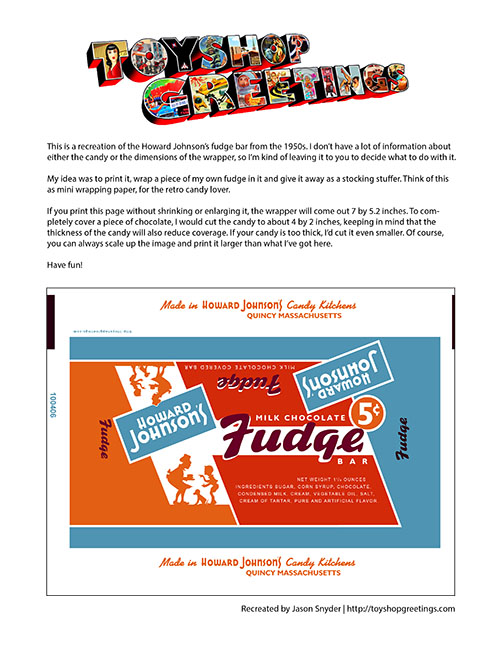 Click on the image above for a full sized PDF to print.
My first papercraft in a long time. Sorry you papercraft fans have had to wait so long! I’ll add several more before the Christmas.
This is a recreation of the Howard Johnson’s fudge bar from the 1950s. I don’t have a lot of information about either the candy or the dimensions of the wrapper, so I’m kind of leaving it to you to decide what to do with it.
My idea was to print it, wrap a piece of my own fudge in it and give it away as a stocking stuffer. Think of this as mini wrapping paper, for the retro candy lover.
If you print this page without shrinking or enlarging it, the wrapper will come out 7 by 5.2 inches. To completely cover a piece of chocolate, I would cut the candy to about 4 by 2 inches, keeping in mind that the thickness of the candy will also reduce coverage. If your candy is too thick, I’d cut it even smaller. Of course, you can always scale up the image and print it larger than what I’ve got here.
Have fun! 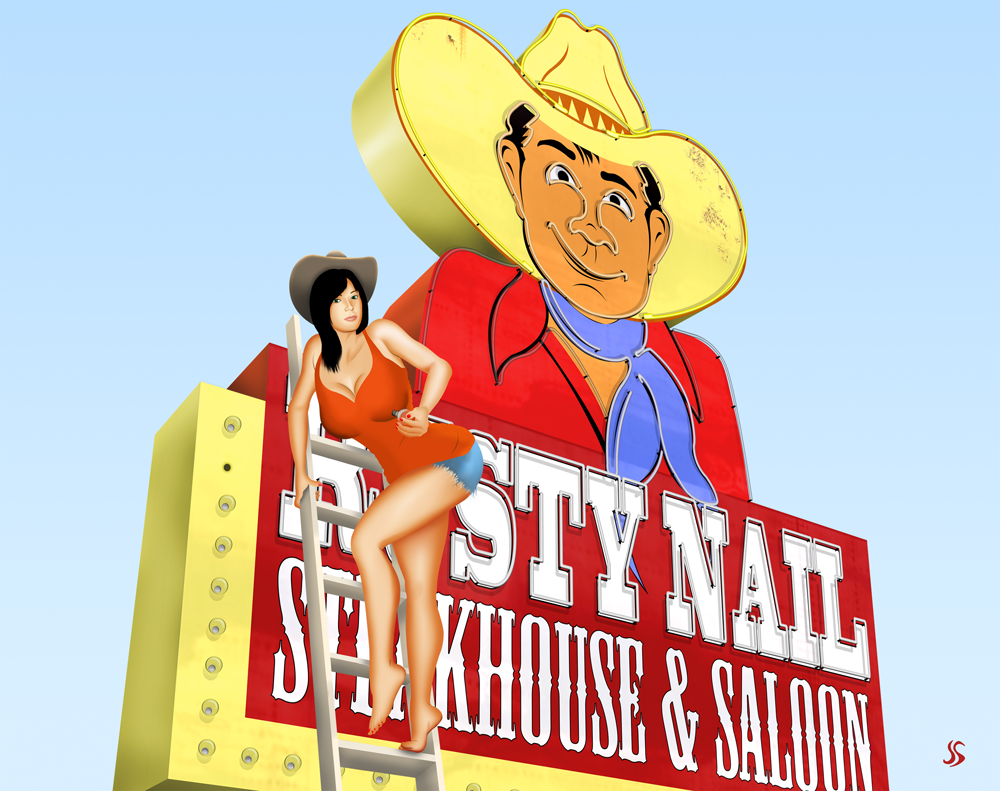 Another new pinup, in preparation for Pinupalooza. This one features some original neon, also created by me. I love neon, and I’ve been looking for the opportunity to include it in a pinup.
I’m exhausted. I’ve never done a show before and I’m stressing trying to get everything done. I am really looking forward to it though. I hope it’s the first of many conventions that I’ll get to take part in. 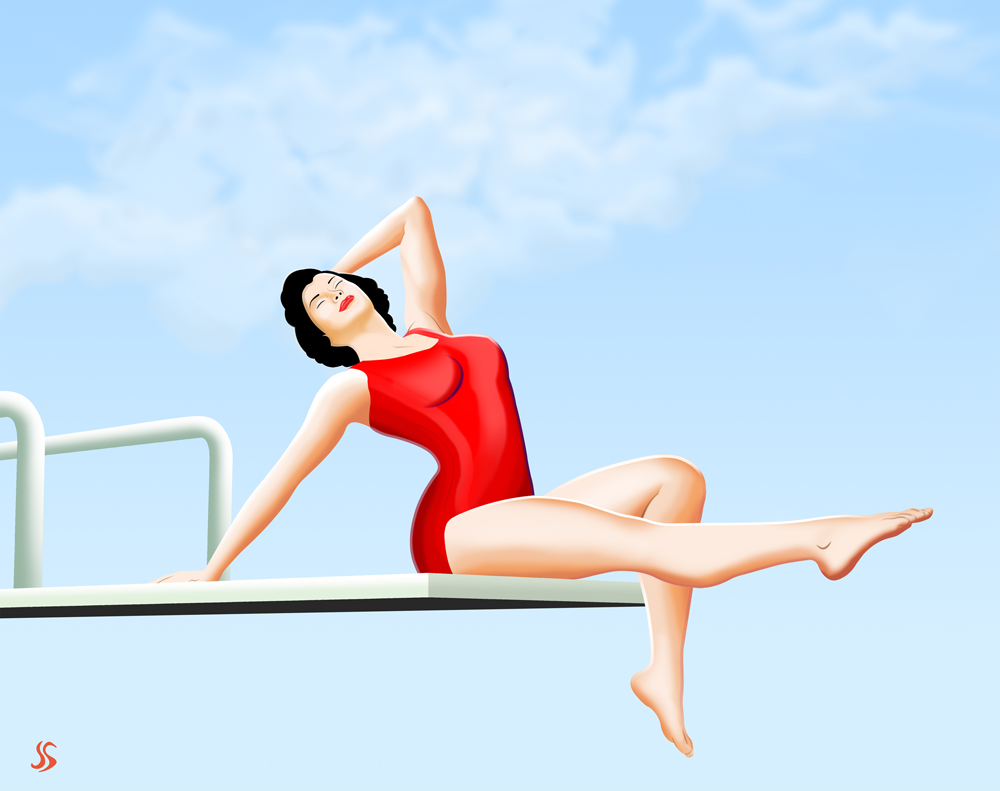 Here’s a new pinup illustration. It’s bright, compared to my usual fare. I like the slightly more painted feel that it has. It’s also reminiscent of an illustrated travel poster from the 1920s or 1930s. Most of my pinups are genre specific. One for tiki, one for a video game, one for a pinball game, and so on. It’s nice to focus on a more generic subject once in a while. Just a beautiful woman getting sun on the diving board.
Remember, Pinupalooza this Saturday in Orlando! 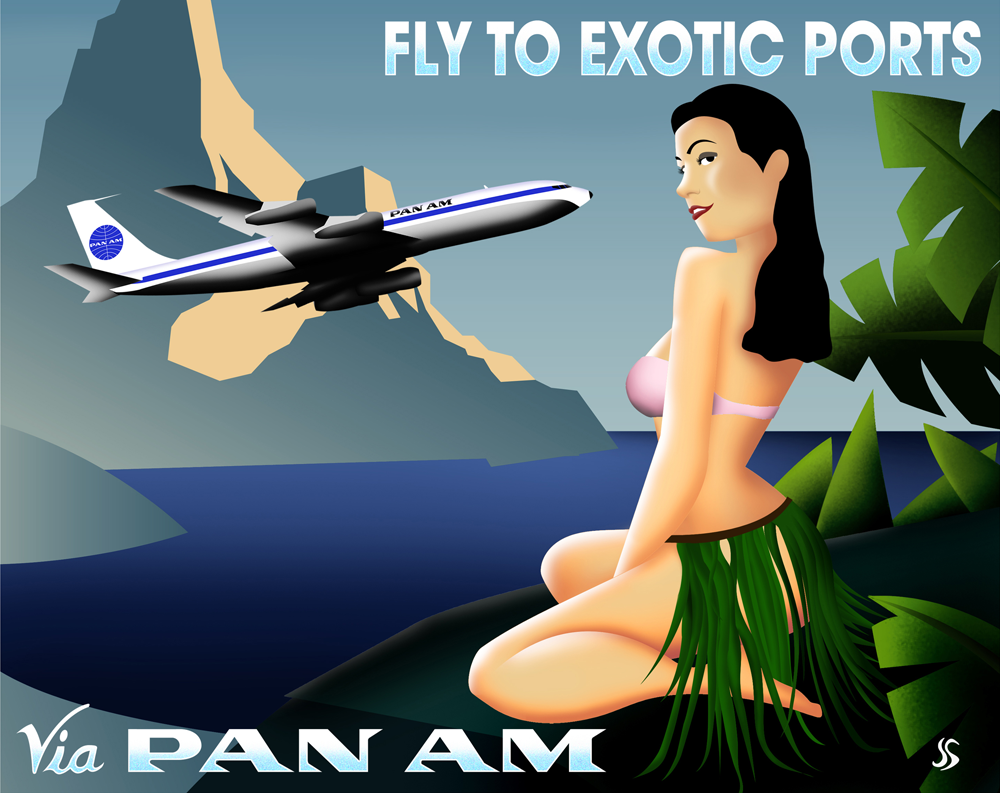 Here’s a new print that I finished up in preparation for Pinupalooza. Actually, truth be told, it’s an old print that I never finished because I wasn’t sure where to go with it. I finally figured it out and got it finished. It’s a little different style than my usual. A little more cartoony, perhaps. I like the overall look though. Click to make larger.

Anyone who knows me, knows of my obsession with the history of the airline industry, particularly Pan Am. I’m proud to say that my interest in the advertising art and style of the jetset years began well before every department and discount store were selling poster reproductions. Here’s my small contribution to the style in the form of a Pan Am pinup.

Inspired by Rob Richards fantastic Animation Backgrounds website, I’ve recreated a background from a classic 1942 Tom and Jerry short called “Bowling Alley Cat”. By recreated, I basically mean I take screenshots as the camera rolled by the background, then overlay them like the pieces of a puzzle. I used pieces to cover up any character animation and digitally airbrushing in any holes. This allows for a pristine version of the original background art.

I probably shouldn’t be wasting my time on recreating others people’s artwork, but I have a fondness for these cartoon backgrounds. A lot of amazing talent went into creating them, and I imagine many of the originals don’t exist any more. If I do others like this, they’re likely to be of similar mid-century and retro futuristic subjects.

Click on the image above for a super-sized panoramic version of the artwork. And if you like this sort of thing, be sure to check out Rob’s website. He’s apparently on a bit of a hiatus right now, but his archive of restored animation backgrounds is astounding!

A friend of mine, William Flood, has a very cool site called Neon Roadside. Bill’s site focuses on a variety of mid-century themes, including Airstream trailers, neon signage and retro architecture, all fortified by photos from his travels. Watch his stuff with interest.
Incidentally, if you like the logo and banner work for Neon Roadtrip, that’s a little of my handiwork. Feel free to drop me a line if you dig my style and would like some work done.